A Reasonable Accounting Of My Experience 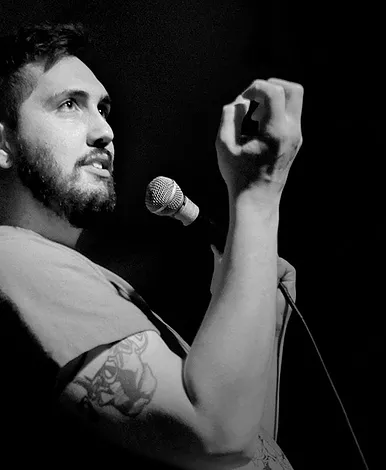 Yeah! Bro
Bigtime Garbage
In The Shadow of the Disco Fish
Lithium Dreams

Jason Hillman is a nationally touring comic as well as an actor/writer/photographer and immigrant’s son (don’t snitch).

With a set rife with non-sequiturs and stories gleaned from his bohemian upbringing,he makes the political personal and is as insightful as he is somewhat off-putting. He discusses how he got into Hip-Hop, nicknames people force on kids AND states, how people need to get better at hating things, and why he just wants the people who lie to us to dress better. We know. It sounds insufferable. People seem to like it, though.

Aside from comedy, he is a tireless advocate for mental health issues, having worked with NAMI to provide outreach to those in need, writing and performing in the nationally touring production, “Pieces,” and training police and corrections officers in CIT, a way for them to approach situations involving those in crisis with empathy, support, and to prevent escalation into deadly scenarios.

He has also taught and performed comedy in a number of prisons as part of his dedication to those that deserve to laugh and love and share their art with the world.

Look for copies of his self produced album, “Dumb Wizard, Or How I Stopped Worrying and Learned To Love Impotent White Male Rage” anywhere CD’s were used as kitschy bathroom wall art.